The GPRS/GPS module can have huge current spikes but the power supply we designed is ready for it and we can see no voltage drop on the 3V3 power supply rail.
The following scope capture shows the 3V3 rail and the voltage on EN line : (Green = GPIO34 / Yellow = 3V3) 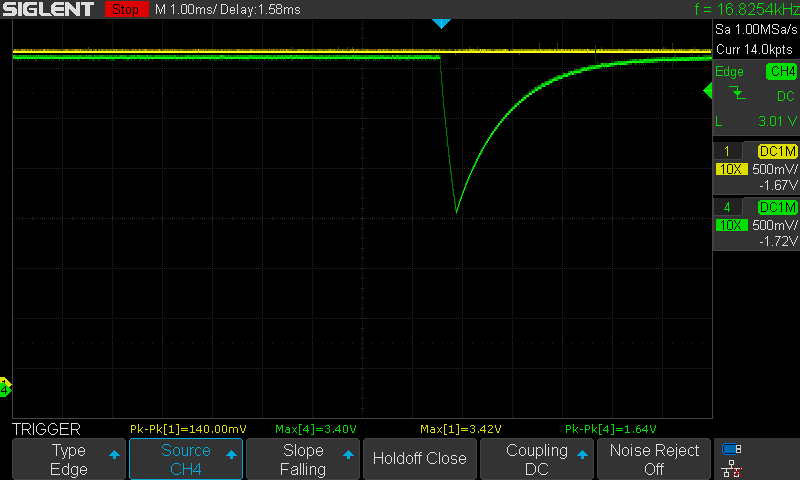 The EN pin is connected to the 3V3 rail as shown in the Espressif's documentation for the ESP32-WROOM (with a 10k resistor and a 0.1µF ceramic capacitor to ground).
Those voltage drops can cause the ESP32 to reboot and cause our whole system to crash.

We spotted a similar phenomenon on GPIO34. When we observe the voltage drop across pin EN, we can see a sharp edge on GPIO34. This phenomenon stays without explanation : (Green = GPIO34 / Yellow = 3V3)

How can we explain that the EN line drops so much while the 3V3 rail stays constant ?

The power comes from two LiPo batteries in series, then go into a LM2596 buck converter, then in a 3V3 linear regulator to the ESP32.

Thanks a lot for your ideas and help
Have a great day,
Paul
Top

This statement is confusing. Is the scope capture for the green line showing the EN line, or GPIO34 ?
Top
Post Reply
2 posts • Page 1 of 1