I followed every single step from this page
https://docs.espressif.com/projects/esp ... setup.html
But still get unresolved inclusion in the IDC.

Googled for a few solutions, but none of them worked.

I'm also not having luck with this on eclipse Windows...
Sometimes the errors disappear but when I have to change branches, eclipse starts to scream again

It's really frustrating having to work with all your code marked with red underlines
I saw some people abandoning eclipse and moving to VS, but as it's not the official IDE for esp-idf, I'm afraid to find even more problems. Hopefully this Cmake support can fix this issue.
"Running was invented in 1612 by Thomas Running when he tried to walk twice at the same time."
Top

Hi there,
I have the same problems. I did every step described in the doc with copy&paste. Controlled it 1000times. No luck.

Here are the settings I use: 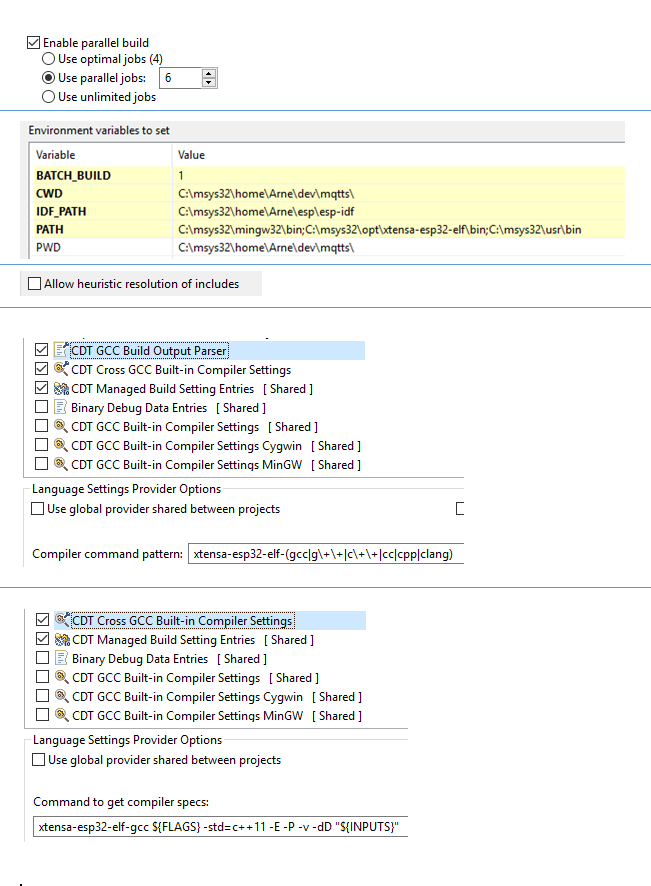 What am I am doing wrong?

On one or more of your project files that are showing unresolved inclusions (e.g. main.c), could you post a screenshot of those files' CDT GCC Build Output Entries (see screenshot below). A log dump of your Eclipse build would also be helpful. 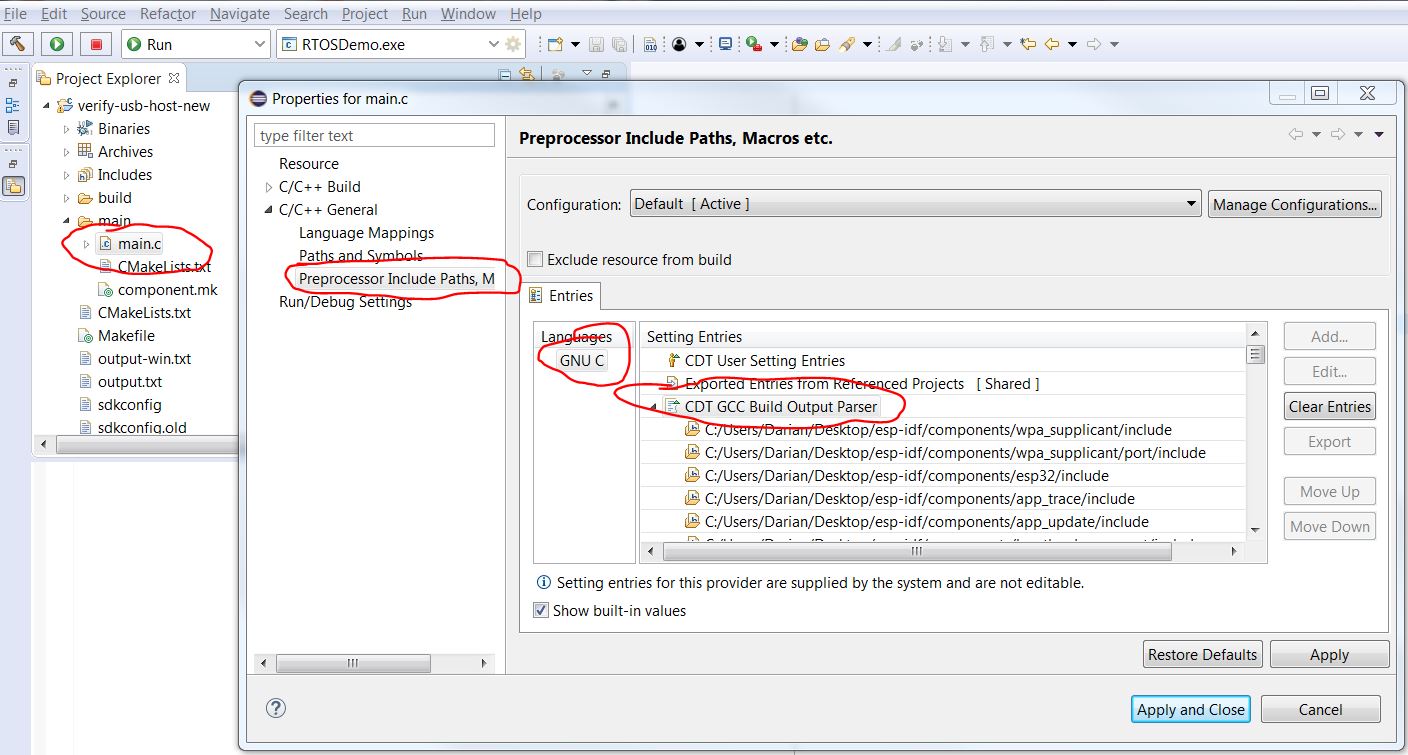 Here are the informations you want to have: 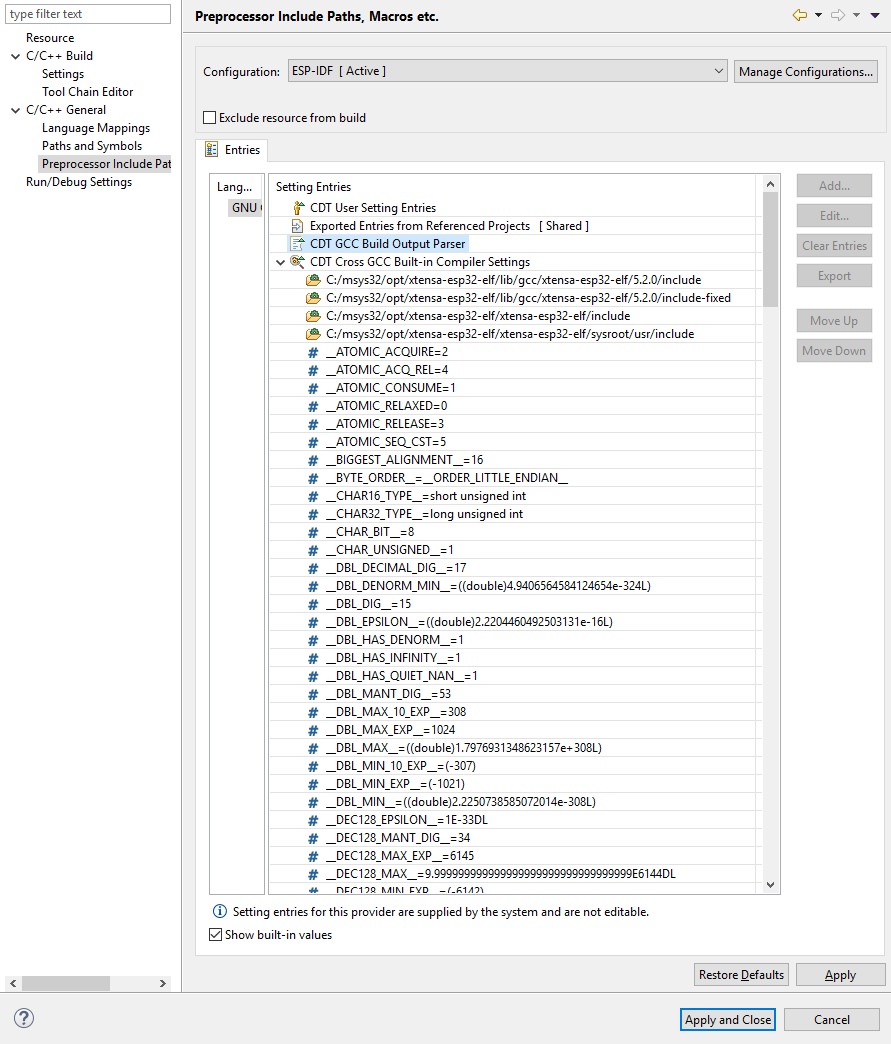 currently g++ and gcc are not found 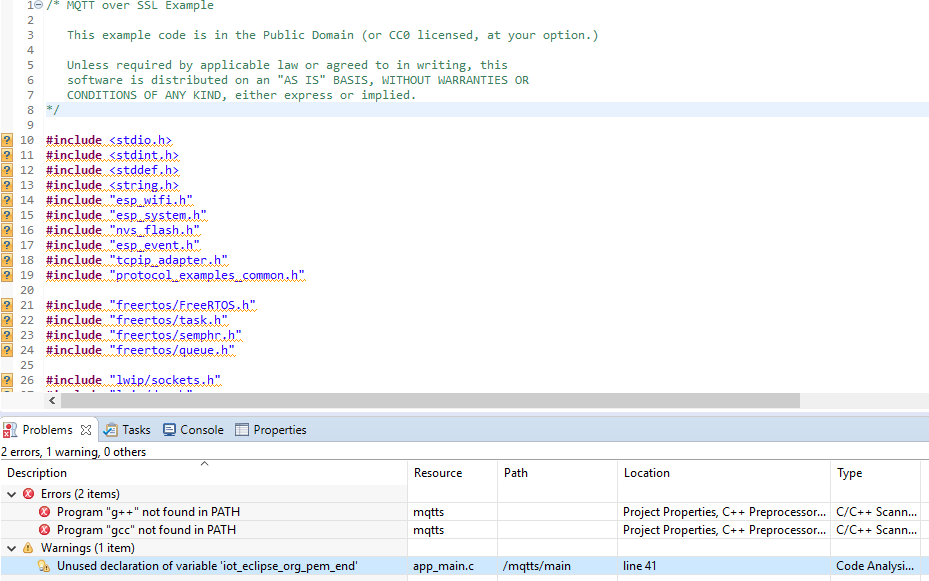 although the path has the following value

Why does eclipse doesn't find gcc nor g++? Both gcc.exe and and xtensa-esp32-elf-gcc.exe are in the path.

Can I give your more information?

I deleted everything again (workspace and the project itself) and recreated it according to the instructions. https://docs.espressif.com/projects/esp ... setup.html
Here is the log-File I found in the workspace

Here are the settings you would like to see 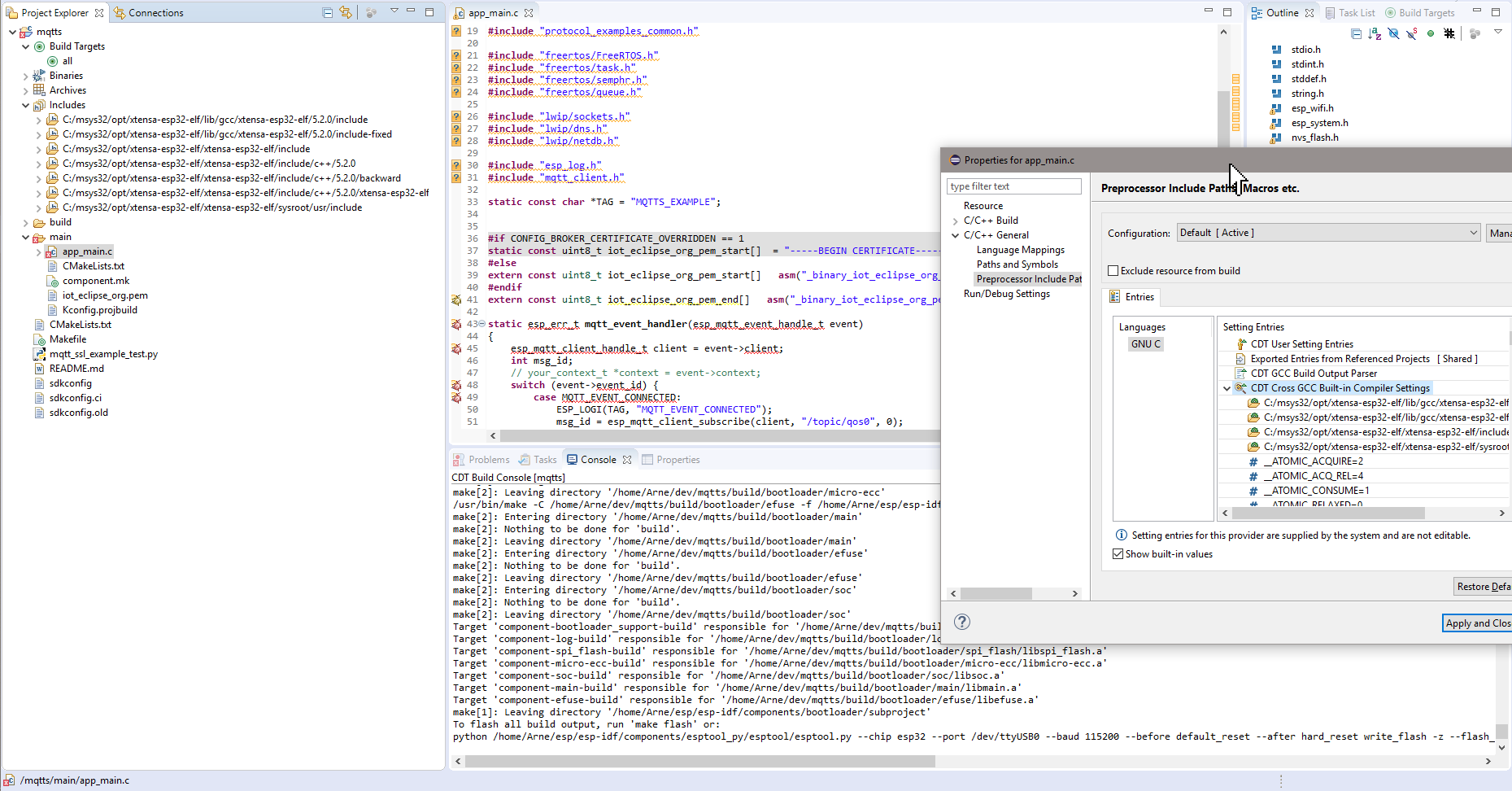 @dasarne by log I mean the Build Log. You can enable it under Project Properties->C/C++ Build->Logging and check Enable Build Logging. Run a full build to generate a complete log output (i.e. clean the project before building all).

From the screenshot you've provided of the CDT Build Console it seems like the build process is able to run successfully, but for some reason the CDT GCC Build Output Parser isn't able to parse any of the paths from the build process. The build process should output multiple calls to gcc or g++ such as the following:

I did it the way you said and found some strainge effects.
I can build the project in mingw32-Console. Than I am able to clean it in eclipse but after that I can't build it in eclipse. See the Log-File

If I build the project in mingw32-Console I can also do it in eclipse.
See Log

but this doesn't help the CDT GCC Build Output Parser.

I hope I could help you to find the problem. Do you need further information?

If you open a CMD shell under Windows, and set all environment parameters from the Eclipse project, you can reproduce the error there as well.

Now that I am able to easily reproduce the error, I noticed that make runs in Eclipse when the file "/home/<User>/dev/mqtts/build/include/config/auto.conf" is present.
So a workaround for this problem is to find a make target that creates this file.
I found the following:

the compilation also works in Eclipse for Windows users.
All theory, my friend, is grey, But green is life's glad golden tree.
Top
Post Reply
19 posts