Was there are change ? Have not look into makefiles deeper yet, ( this i will do in next step, perhabs order mistake cmake/make ? )
perhabs we have a menuconfig switch for choice of src using ( my future request if we not have )
ESP-IDF-PATH bootloader src / or / Project bootloader src
i use just in time ESP-IDF version (v3.2-beta1-15-g12b2268ee)

I testet shortly then the code edit in the Base ESP-IDF-PATH Boorloader SRC, my custom code works, so i am happy that we can further customize our own bootloader code, ( no bootloader blob / lib )
for next test projects i have to edit it again in the base ESP-IDF-PATH Component,
so my question: was there a change ? i missing something? my eyes did not follow the last update comment's in ESP-IDF -
i must look deeper - so perhabs i registrate not the important change? can you point me to the change?

was the (use of components) order changed (order of success)?
is the art of custom code in the project folder no longer supported and only the Base ESP-IDF-Components are considered,
and if we want cutsomized, we must edit the components in the Base-ESP-IDF-Components ?
i am something info missing?

thank you, i use GNU Make in this example.
i am honest, this git version i changed not since near 1/2 year i think on this pc,
cause i was happy with this - but ok, i will check and change asap to the stable v3.2.2 on this pc,
thank you Angus.

i tested just in time but custom bootloader does not override original. 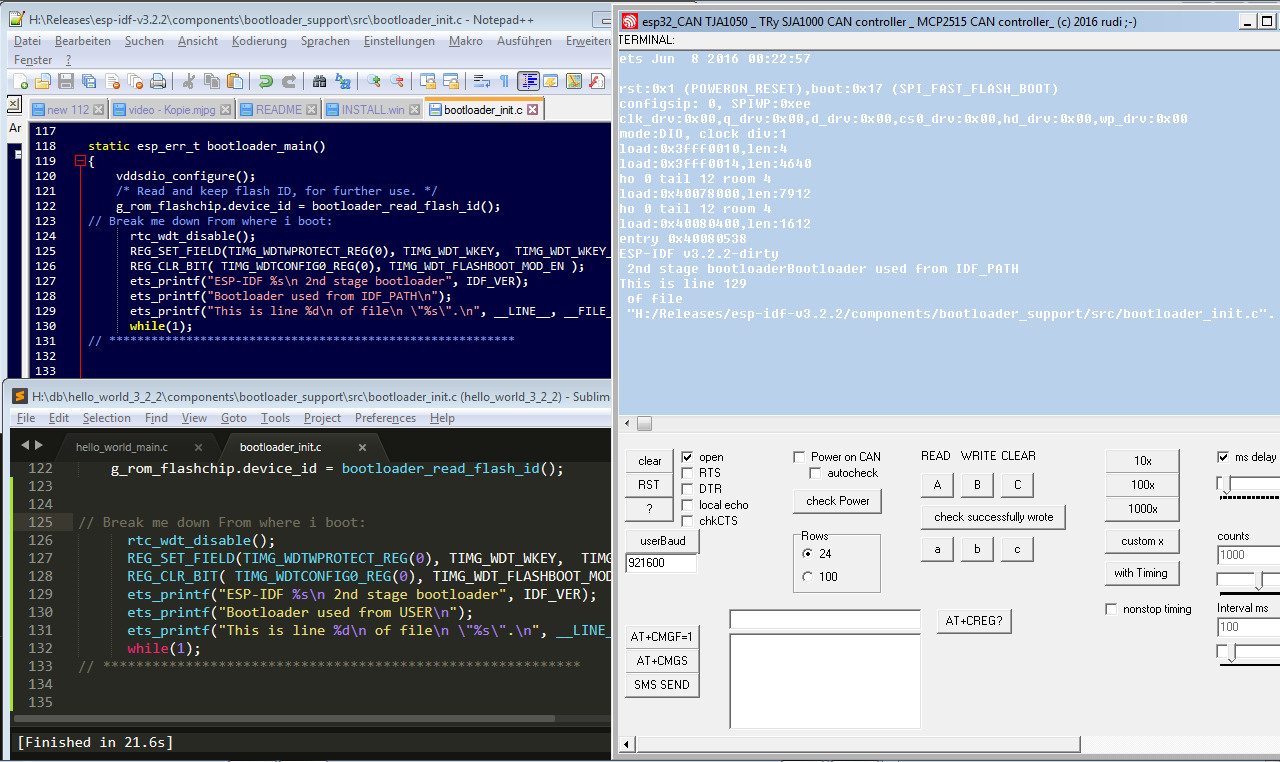 i will try to check makefiles and include paths on time,
if you find faster or know, would be help to update the Release V3.2.2
perhabs missings include / set for GNU Make buildsystem?

next step, i will check the toolchain version to the 3.2.2,

ok, i tested it now with several ways and i think, we have a BUG in this.

Custom Bootloader in Projektfolder is no longer considered


the problem is the same with Ubuntu and GNU Make:

the strange is, that the make command: list-components

point out the right but in the compile not considered.

BUG? i think, yes.
open an issue at git for this ?


btw.
i did not noticed this, cause i allways did edit in the base ESP-IDF last times
cause i am working generell with a custom bootloader,
for a test i did moved the components to the project folder
but this components are no longer considered.


feel free to check it out, use example the hello_world

g) save it,
h) check and controll with

and`?
is the project component used or the esp-idf path component?
..

i opened an issues now.
i can not spend to much time in the make jumbo-mambo doing in ESP-IDF

so
it becomes more and more neural connections that are no longer traceable.

please, have a try at your R&D desktop at espressif
please confirm if you found the same problem so we know that we have in the meantime to use
custom things from Base IDF.


i noticed, that the target point will be using cmake in future, i think.
i hope we get parallel support with GNU Make longer time, CMake is not allways the best choice for these things.

i noticed, that the target point will be using cmake in future, i think.
i hope we get parallel support with GNU Make longer time, CMake is not allways the best choice for these things.

GNU Make/CMAKE/64bit WIindows
ok i noted in few postings, that more the more cmake is used and GNU Make is supported only do v4.x.
i read, the existing GNU Make based build system will be deprecated in ESP-IDF V5.0.


also i read the CMake-based build system is only supported on 64-bit versions of Windows.


it is getting close

i understand the cmake practice and trouble and now
(only cmake) eclipse plugin - I hope espressif does not hide ways and possibilities. Many (many) still use these and the "switch" to CMake does not accomplish some.
(just because of the 64bit need of Windows)
Many are on the move with VM and 32Bit versions,
Considering, WIN10 has been mainly delivered as a 32-bit,
certainly 64Bit. that will be tight - many possibilities do not have old veranen then. to stay as with the predecessor.

Will it be an ESP32S2, ESP32S3, ESP32S4 GNU Make Version
32bit Windows version then no longer give? Not at all?
So I understood it now, it must necessarily be installed on 64bit Windows because CMAKE demands 64bit?
And CMAKE gets the base for future ESP-IDF from 5.0.

I myself have no problem, as long as I do not have to use only CMAKE, it's something new, old system is running, why change. Also, the older GNU Make SDK must be deleted as I understood then. Better then from ESP32S2 then a new PC for compatible old Projects

? I have been practicing this since ESP8266, and use a different PC for every major circumstance. But now to meet two requirements, 64Bit and only CMAKE, that's a lot of incision, my opinion (but what do you do not do anything).