Vader_Mester wrote:My question is related to the parallel I2S driver in general.

How does the WS signal work in I2S parallel mode?
For example if I configure the bus to be 8bit wide, but the word length is 16bits, then the two half of the 16bit word will be clocked out with BCK, and WS will be 2BCK cycles long, with the high part (1BCK cycle) of the WS cycle signaling the 1st half and low part (1BCK cylce) for the 2nd, if I'm correct. (I know WS can be inverted).

By the way the above is what I want to achieve with the I2S, and reading the technical ref I'm pretty much confused on how BCK and WS are related in parallel and how flexible I2S is.

Generally I just want to achive a general half-duplex 8bit with parallel bus, with 16bit words, where 1 WS cycle is the length of some even number of BCK cycles (like 1WS can be 2, 4 8, etc BCK cycles long)... whichever is easier to set up.

It would be nice if someone gives some insight on how it works, cause you are the ones who know more about the I2S parrallel driver than anyone else.

You can simplify this code as an example and examine he output with a simple scope or logic analyzer to see if it does what you want. There is a function that connects the internal data through the matrix to each output pin, that function has a flag that can invert the logic of any pin, you can inverter the WS clock if you wish.

For me it was easier to clean up the display driver and get a very nice result by just encoding the clock into the DMA data and forget the WS signal. To do it cleanly you need to stop clocking and latch the data and flip the row addressing. I am running a 64x32 panel with this technique and the output is very clean.
Top

I realized soon enough that a logic analyzer is needed for further development.
We will see.

I had the same thought, it is actually very easy, to implement these signals into the DMA...
However It's not gonna work in my case since I wanna make this driver into a parallel LCD driver (MIPI-DBI Type B). In that case you occasionally have to read data from the LCD, so controlling the control signals through the function is a must.
There are 2 types of programmer people: The Expert programmer and The Smart programmer

Unfortunately the OSH project by BirdTechstep seems to be gone. Is the PCB available somewhere else?
Top

TheNitek wrote:Unfortunately the OSH project by BirdTechstep seems to be gone. Is the PCB available somewhere else?

It's not gone:
https://oshpark.com/profiles/BIRD-TEHCSTEP
Top

I have swapped and it seems not to work...

It looks like the code was only tested on I2S1. Search I2S_Parallel for

I2S0 seems to have the same issue. You can copy the code block that changes the base and apply it to I2S0 as well:

The way of refreshing the panels in Sprite_tm's example code makes a lot of sense for the ESP32's architecture, but highlights some problems with these HUB75 panels. After charging up a row by setting the address lines and then releasing that row by moving to a new row, the row drivers needs to be discharged through the column drivers and LEDs. This lights up pixels that may not have been intended to be lit on the current row. This shows up every time the address line changes, and the method of refreshing the panels in the example code is switching rows as frequently as possible, leading to the maximum number of ghost pixels showing up.

Here's a photo of the example code refreshing a panel with CLK set to 20MHz, and a test pattern displayed. The diagonal line maximizes the ghost pixels as each row has only a single unique column lit, forcing previous rows to discharge through a pixel that wasn't intended to be lit. 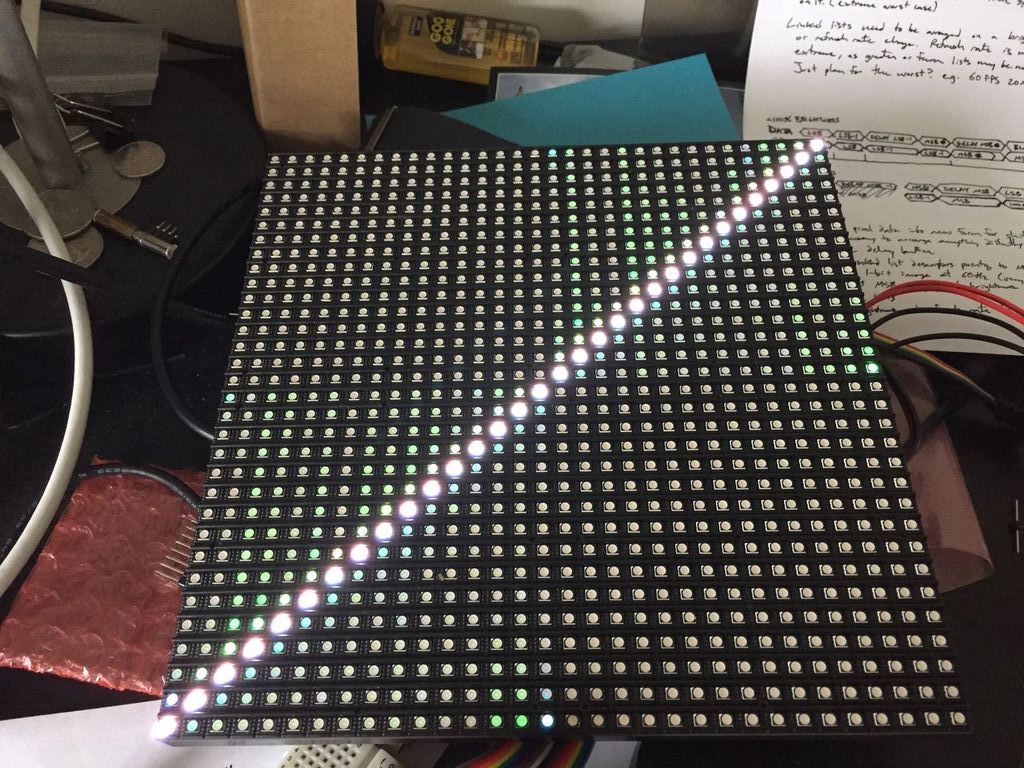 Here's some other references describing the issue and solutions.

The best solution - that doesn't involve modifying the matrix panels themselves - seems to be to minimize the number of row switches when refreshing, so shift out all the color bits for a given row at once, before moving to the next row.

I modified the example code to do just that. Here's the same panel and test pattern refreshed with CLK set to 20MHz. 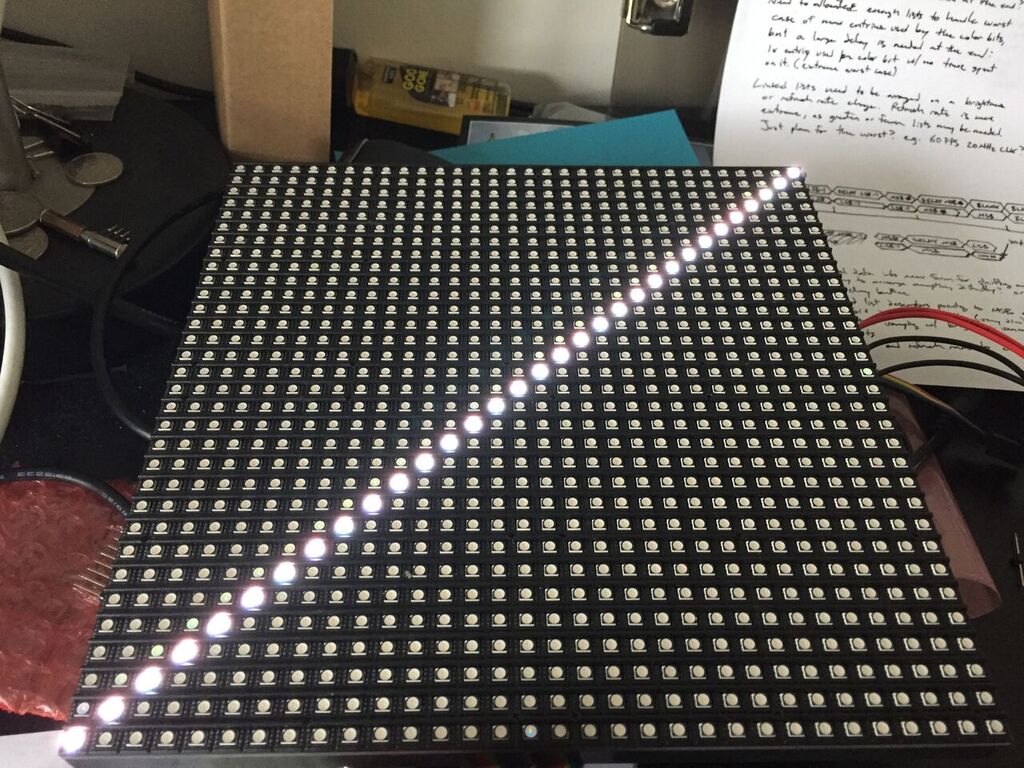 It looks much better, at a distance you may not even notice the ghost pixels. They are still there, but dimmer and limited to the row above each lit column. (There's another even dimmer green pixel lit below the row, but I think this is an unrelated bug I haven't yet tracked down) 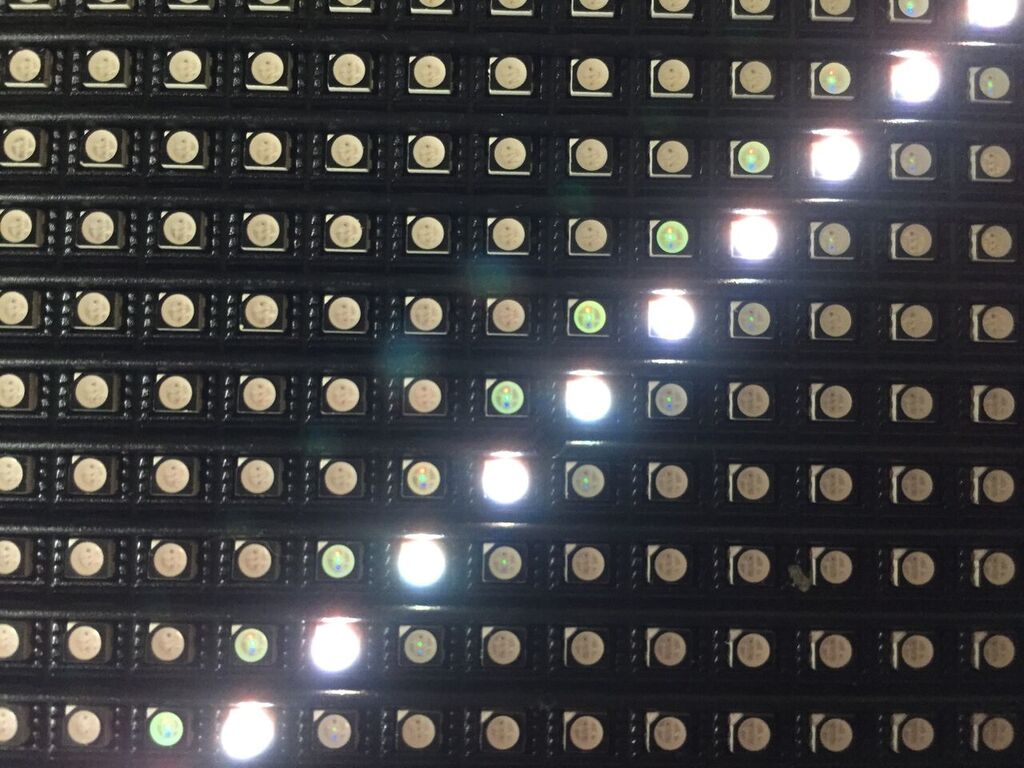 This method of refreshing has some downsides. Because the binary time division is applied to each row, not each frame, it requires more linked list entries, using up more RAM. The simplest way of applying the technique would require 16x the RAM for the linked lists (32 rows / 2 pixels refreshed in parallel per row). I'm reducing the RAM required in two ways.

First, I sweep from color LSB to MSB, instead of a color bit at a time, which divides the RAM required in half.

I made the above changes to the code, and cleaned some of it up (fewer magic numbers), and fixed a few bugs. The modified example code is up on GitHub. (If you want to change the CLK speed, you'll need to edit that in i2s_parallel.c, the code using clkspeed_hz is broken and I haven't tried fixing it yet.)

I have the SmartMatrix Library ESP32 port far enough along that other people can start using it. I'm able to do up to 48-bit color refresh while keeping the refresh rate high. Here's a demo video showing refreshing a 64x32 panel with 36-bit color, >120Hz refresh (I think it's around 200Hz), and generating patterns using the FastLED Library, and playing Animated GIFs from a SD card.

I'll be discussing the ESP32 port in more detail here:

You can find code, circuits, hardware files and BOMs, and a README with more info and a list of items still in progress at GitHub:

I got I2S Parallel working in 8-bit mode so the SmartMatrix Library can refresh the panel with I2S data stored in uint8_t instead of uint16_t, cutting the RAM needed to hold the refresh buffer in half. I made the modifications inside SmartMatrix Library and not Sprite_TM's I2S Parallel example, but for anyone that needs it, hopefully this GitHub commit gets you going in the right direction (it’s not well documented in the reference manual and what I have working seems like a bit of a hack!):

Props for figuring all this stuff out. Its appreciated.
Top
Post Reply
61 posts

Users browsing this forum: No registered users and 3 guests